New Voices in the Boardroom: The Gradual Evolution of Board Composition

The stakes for having the right people around the boardroom table have never been higher. Directors need to have the skills and experiences that not only align with their company’s long-term strategic direction but also enable their boards to effectively advise management amid unprecedented change and business disruption. Board succession has emerged as a key priority for shareholders, who increasingly expect boards to have a rigorous process in place for assessing board composition and refreshment. Of particular concern are whether there is enough diversity in the boardroom, whether the board has the right combination of skills, and how the board views director tenure.

Notably, directors with diverse profiles are increasingly joining US boardrooms. However, a chronically low rate of director turnover is bringing about only gradual shifts in the overall makeup of US boards. The modest pace of change is likely to persist, meaning that corporate boards are likely to evolve only incrementally.

Directors with diverse profiles are increasingly joining US boardrooms.

Looking to the year ahead, the following represent the board trends Spencer Stuart believes will continue or accelerate in 2019, and how they are likely to shape board composition in 2019 and beyond.

Turnover will continue to be driven by director departures and mandatory retirement in the near term.

In 2018, S&P 500 companies added the highest number of new directors since 2004 — roughly 0.88 new independent directors per board. That said, overall turnover in US boardrooms is modest, and is likely to remain so for the foreseeable future, impeding meaningful year-over-year change in the overall composition of S&P 500 boards. During the 2018 proxy season, a little more than half of S&P 500 boards (57%) added one or more new directors.

Barring changes in boardroom refreshment practices, this trend is likely to continue. Limits on director tenure are rare today. Only 25 S&P 500 boards (5%) set explicit term limits for nonexecutive directors, with terms ranging from 9 to 20 years. Additionally, it does not appear that individual and/or peer assessments are regularly used by boards to promote refreshment. Only 38 percent of S&P 500 companies report some form of individual director evaluations, a percentage largely unchanged over the past five years.

Three-quarters of the independent directors who left S&P 500 boards in the 2018 proxy season served on boards with mandatory retirement ages. The age limits appeared to have influenced many of these departures — 37 percent of retirees had reached or exceeded the age limit at retirement, and another 16 percent left within three years of the retirement age. Currently, only 16 percent of the independent directors on S&P 500 boards with age caps are within three years of mandatory retirement.

Experience as a CEO, board chair, or similar position is no longer viewed as the only qualifying credential for director candidates.

The boardroom will gradually be reshaped by new perspectives and expertise.

While modest turnover will continue, evidence suggests that boards will use openings from director departures to inject fresh perspectives and expertise into emerging areas of need.

For one thing, experience as a CEO, board chair, or similar position is no longer viewed as the only qualifying credential for director candidates. Of the 428 new independent directors added to S&P 500 boards in the 2018 proxy year, only 35.5 percent were active or retired CEOs, board chairs, or similar, down from 47 percent a decade ago. Nor is a background in a public company boardroom a requirement. First-time public company directors constituted 33 percent of the 2018 class of new S&P 500 directors. These first-timers are younger than their peers and more likely to be actively employed (64% versus 53%). They are less likely to be CEOs or chief operating officers, and more likely to have other managerial experiences such as line or functional backgrounds or to hold roles in division/subsidiary leadership. They are also more likely to be minorities: 24 percent of first-time directors in 2018 are minorities, versus 19 percent of all new S&P 500 directors.

Of the 428 new independent directors added to S&P 500 boards in the 2018 proxy year, only 35.5 percent were active or retired CEOs, board chairs, or similar, down from 47 percent a decade ago. 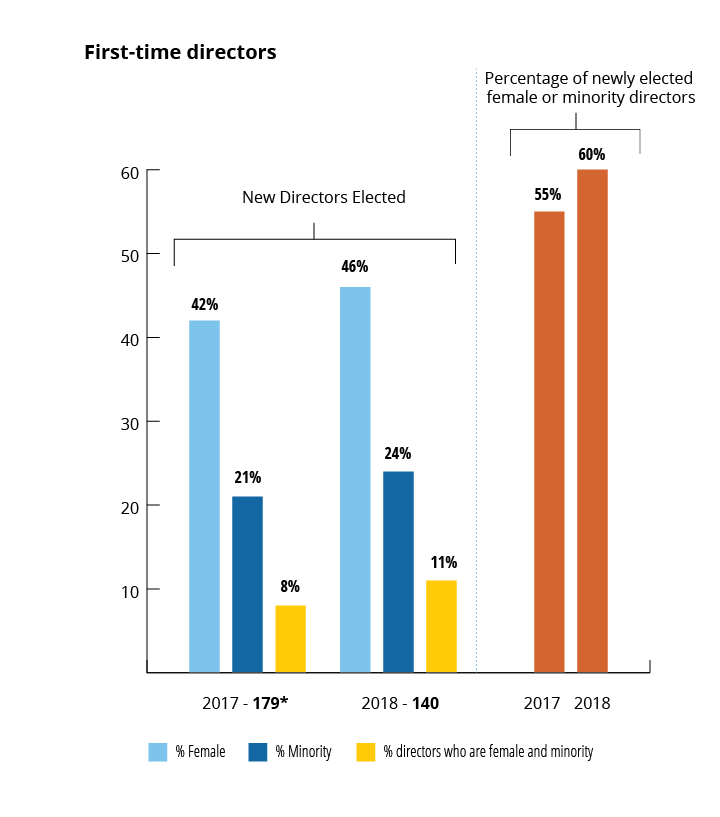 *Includes directors who had served or were serving as an executive director on a public company board.

Recognizing the strategic imperative for new perspectives and experience in the boardroom, boards are increasingly adding directors with backgrounds in technology, digital transformation and technologies, consumer marketing, and other areas of emerging importance. Financial talent remains prized, especially the experiences of chief financial officers, finance executives, and/or investment professionals. That said, as investors have continued to press for more gender diversity, S&P 500 boards have increased the number of women directors, reaching a new high: 40 percent of new directors in the 2018 proxy year are women, an increase from 36 percent in 2017.

Boards are also likely to enhance disclosures about composition. As interest in boardroom composition among investors has increased, a growing number of companies are voluntarily enhancing their disclosures to highlight the diversity of their boards and to showcase how director skills and qualifications align with company strategy. In fact, nearly a third (30%) of S&P 500 companies have published a board matrix spotlighting the skills and qualifications of each director on their governance web page.

Younger directors may become a potent new voice in the boardroom.

As boards prioritize new areas of expertise — such as industry and functional experience in technology and digital transformation, and certain areas of marketing and finance — many are tapping “next-generation” directors whose qualifications align with the needs of their organizations. One out of six directors (17%) in the 2018 class of new directors is age 50 or younger.

Given that their backgrounds and profiles differ from more traditional board members, these directors are likely to bring varied perspectives to boardroom discussions. Nearly two-thirds of these “next-gen” corporate directors have expertise in three sectors: technology/telecommunications (34%), consumer goods (16%), and private equity/investments (14%). A majority (almost two-thirds) are serving on their first public company board. More than half (53%) are women.

Interestingly, these directors may also be less likely to have lengthy tenures, due to factors such as the demands of their careers, a desire to move on, or dissatisfaction with their board experience. Twenty-eight (7%) of the 417 directors who left an S&P 500 board seat in the 2018 proxy season were 55 years old or younger, with an average tenure of five years. Other directors who departed their boards over the same period had a much longer tenure on average (12.7 years) and were 68.4 years old on average.

Business demands and investor pressure are likely to change how boards think about composition and refreshment strategies.

The implications for your board

Business demands and investor pressure are likely to change how boards think about composition and refreshment strategies. Increasingly, directors are recognizing that board composition should support and reflect the strategic needs of the organization. Boards can use the following recommendations to enhance short- and long-term approaches to their composition:

Have an ongoing refreshment strategy.

The composition of the board should be viewed as a strategic asset. Boards will be better prepared to plan for and take advantage of openings if there is a formal approach to refreshment. This includes regularly reviewing and aligning the board’s makeup to the company’s strategic direction, identifying desired competencies for future directors, and regularly infusing the board with perspectives relevant to the organization’s future needs.

Increasingly, investors consider meaningful full-board and individual assessments as “best practice” not only for evaluating and enhancing board and director performance but also for promoting boardroom refreshment. While annual evaluations have become the norm for boards, far fewer — 38 percent of S&P 500 boards — report some form of individual director evaluations. Proactive boards assess skills and attributes, incorporating results from board self-assessments. They also take a multiyear view of departures, including upcoming board leadership changes, and set clear expectations around director tenure.

Key Questions for Directors to Consider:

The nominating and governance committee chair and other board leaders should ensure that the board has a robust new-director orientation program in place. Incoming directors, particularly younger and first-time board members, benefit from an orientation and continuing education that familiarize them with the company’s needs and the board’s approach to governance. At a minimum, a director onboarding program should provide insights about public disclosures and nonpublic materials (such as board meeting minutes, forecasts, budgets, strategic plans, etc.) and socialize the new director(s) with key executives and members of senior management. Additionally, the board should recognize that new directors may find it helpful to partner with a mentor — formally or informally — who they can turn to for questions and feedback.

With greater focus on diversity, board culture becomes critical.

Boards are adding new perspectives to enhance board deliberations and improve outcomes. But greater diversity also increases the likelihood of misunderstanding and tension among directors with different points of view and backgrounds. In the past, boards tended to be more homogeneous and, as a result, there was typically more implicit agreement about director interaction and behavior. Today, with higher levels of diversity in the boardroom — whether in terms of experiences, skills, gender, race, ethnicity, nationality, and/or age — it’s critical to create a boardroom culture that facilitates constructive interactions between board members. All boards can benefit from cultures that value inquisitiveness and flexibility, and where directors are comfortable challenging one another’s — and management’s — assumptions and ideas.

Note: This article was originally published in the NACD 2019 Governance Outlook.

*Julie Hembrock Daum leads the North American Board Practice and was a long standing board member of Spencer Stuart. She consults with corporate boards, working with companies of all sizes from the Fortune 10 to pre-IPO companies. She has conducted more than 1,000 board director assignments, recently recruiting outside directors for Johnson & Johnson, Whole Foods, Amazon, Saudi Aramco, Nike, numerous IPOs and spin off boards.